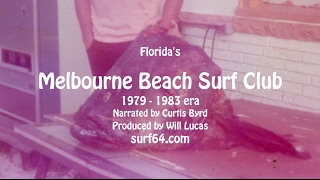 This 10 minute film features Curtis Byrd discussing The Melbourne Beach Surf Club’s early years beginning around 1979. In 1983, as part of Founder’s Day, The Pineapple Surf Contest was born. Lots of great photos. Produced by Will Lucas – surf64.com – in 2013 as part of the Movies In The Park Series. Remastered in 2017.