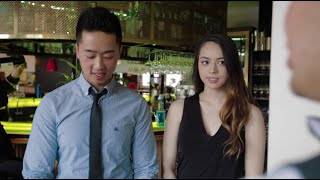 So this video is based on my experiences with fine dining and Asian restaurants, Chinese, Korean and Japanese in particular 🙂
Can you relate to this video? hahaha

I filmed this video with a bunch of friends and fans in Melbourne
Big shout out to the following people:
Louna was the lovely white girl
https://www.youtube.com/user/Loopylady11
Dan played the white guy
youtube.com/danielsvideochannel
Rachel as the Asian girl
www.instagram.com/skylightcasimir
Coleen played the Japanese waitress
https://www.facebook.com/calexeymodel
Andy came back as the Chinese waiter
Kevish also played the Chinese waiter
Min Lee played the Korean waiter https://instagram.com/min_ug_lee/
Jungyu played the second Korean waiter
Evonne helped out with make up and hair
Bri and Viv who played the kids (my cousins)
Joe played the fine dining waiter
https://www.youtube.com/user/josephvprincipe
Tom the pheg played himself
Tweets by tomtomvu
Massive shout out the collab studios: J Bling, J Nguyen and also Nick Raw (director and camera men)
https://www.facebook.com/ColabStudios?fref=ts
Helen who came down to shoot behind the scenes
Daniel Sim as the Weeaboo
https://www.youtube.com/channel/UCYQH60thOvz3icUnCvy1JCA
Takumi Kawakami as the Japanese waiter
Monica C for being second A.D
Jeremy and Patrick who was an extra on the day

There were hundreds of people who were interested in filming but I could only pick a handful. Sorry to all the guys who missed out
If you’re interested in being in my next video, follow my Facebook page for more details:
https://www.facebook.com/pages/Mychonny/146853695356556

Thanks so much for watching guys!
I will be posting more videos soon! Take care!!
bye