First Friday by the Bay – Things to do in Palm Bay 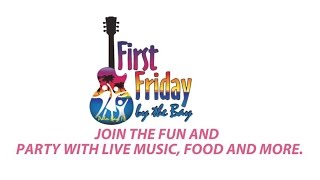 First Friday By The Bay – http://www.accessbrevard.com
A Monthly Family Festival with Live Music, Food, and More is here! Finally, right here in Palm Bay, we will host a festival for the whole family. Look forward each month to live music from top name bands, food of all types, activities for the kids, all right by the Bay.

FREE to attend, the location will be at the corner of US1 and Palm Bay Road at the Palm Bay Chamber of Commerce located at 4100 Dixie Highway NE, Palm Bay, FL 32905.

The Florida city of Palm Bay is located in Brevard County, on the east Central Florida coast. The city is situated just 10 miles southwest of Melbourne, about 65 miles southeast of Orlando, and 180 miles north of Miami. Major highways near the city include Interstate I-95 and U.S. Route 192.

Palm Bay’s modern history traces back to 1959, when the Mackle brothers from Miami purchased land for a local residential project. Although the project had its stops and starts, it spurred the growth of industry and population in the area, leading to the incorporation of the city of Palm Bay in 1960.

The city’s first major industrial corporation, Radiation, Inc., later evolved into the Harris Corporation. Other industry soon followed, and the 1970’s saw construction and expansion in the city. Palm Bay experienced enormous growth in the ensuing two decades, including the completion of a new municipal complex housing the city hall and police station. The city today continues to grow largely due to its proximity to the ocean and to other major areas of central and coastal Florida.

Things to See and Do in the Palm Bay Area

Palm Bay and the Brevard County area offer a choice of many sites for recreation, entertainment, and culture. The Wildlife Turkey Creek Sanctuary is home to many rare and endangered plants and animals. The Florida Tech Botanical Garden offers a 30-acre landscape of picturesque palms in numerous varieties. Anglers can find plenty of fishing at the Sebastian Inlet State Park, 20 minutes south of Palm Bay, where sport fishing can be done from private boats or on one of numerous charter fleets.

A lively arts community thrives in Brevard County, home to an abundance of talented artists, musicians and actors. The Maxwell C. King Center for the Performing Arts plays host to a variety of performing arts, including Broadway musicals, symphonies, opera, jazz, ballet, and comedy. Other area theatres include the Phoenix Theatre and the Melbourne Civic Theatre.

The Brevard Museum of Art & Science offers interactive children’s exhibits as well as art classes throughout the year. Also located in the Brevard County area are the Margaret Homes Nature Center, the Titusville Historic Museum, the Brevard Museum of History and Natural Science, and the Air Force Space Museum. Fifty miles to the north is the Kennedy Space Center and Astronaut Hall of Fame, and 65 miles to the northwest is the city of Orlando, home to world class attractions such as Disney World, Universal Studios, and Sea World.