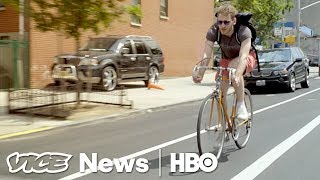 Sean, a bike courier in New York City, says his on-demand job has a special perk — the freedom to plan his delivery route through the neighborhood where he buys weed.

On-demand jobs like Postmates, who Sean bikes for, are rapidly growing in popularity. In 2016, 3.7 million people worked on-demand jobs; by 2021, that number is expected to triple. The Postmates app works similarly to Uber, except users are able to order food or practically anything else sold in stores to their front door. Sean started working for the company part-time to make extra cash on the side on top of his other job at a spa. He typically pulls in anywhere from $10 to $200 a week working up to 20 hours.

Sean currently rides a couple days a week, sans helmet — and health insurance. VICE News followed him along his route during a typical day.

VICE News profiles Americans working in jobs today that reflect that landscape of our current economy. This episode follows Sean, the on-demand Postmate, as he takes on his work day by bike in New York City.