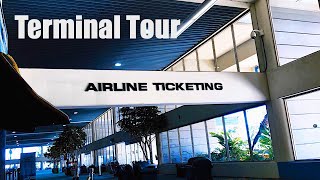 Hello, everyone. I visited the Orlando Melbourne International Airport to film b-roll footage for upcoming videos planned in the new year. I figured that many airport/airplane aficionados like me would enjoy watching my compiled footage in a special upload separate from my vlogs.

I filmed this footage on Saturday, December 30, 2017, in the landslide area of the domestic departures terminal at the Orlando Melbourne International Airport. Traffic was visibly quiet. The only crowd I saw appeared when an American Airlines flight from Charlotte arrived mid-afternoon.

I will type in time-stamps in the comment section below for each of the points-of-interest featured in this video.
__________

To learn more about Adrian, visit his official website
https://www.AdrianDHolmes.com/
__________

Direct all business inquiries or video permissions request to:
development@adriandholmes.com
__________

**NO PORTION OF THIS VIDEO MAY BE USED WITHOUT WRITTEN PERMISSION FROM SKIP WILSON MEDIA OR THE ADRIAN D. HOLMES TEAM.**

Email
Posted in Places To Stay